In the 11th Anniversary of WTC massacre.

Title of the work:

From an article by dr. SRINI PILLAY, Psychiatrist, Harvard clinician, brain imaging researcher, author of “The Life Unlocked”, “Your Brain and Business: the Neuroscience of the great leaders”, “The Science behind the Law of Attraction” , The Huffington Post columnist

Nine eleven did not just affect America.  It affected the world. Roberto Alborghetti was walking along Vico Street in Milan last spring when his eyes suddenly fell upon an image: red and black and described by him as either “hands, arms, fire tongues or hydrants,” he began to see the primal theme that this image represented. 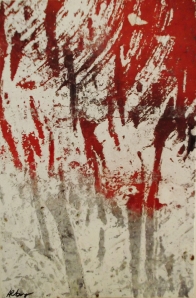 Besides, it was a torn poster on a wall, and its urban origins were undeniable.  He looked on more closely, and as his mind wandered over several images, it landed on one that seemed to him most like what this was.  These, says Alborghetti, are: “..scenes in which the earth cries its fury to the sky, and the sky answers with its blood teardrops.”  Seeing the tragedy, he immediately made an association to one that had touched him very deeply: 9/11.  Knowing that he wanted to dedicate this one, of his poster images, to 9/11, he reproduced the image on canvas. He also approached the textiles designer Bruno Boggia who suggested that Alborghetti make a silk scarf with the image.  He did…  He plans to donate the scarf to a Fallen’s relative association.  Intrigued by this man’s penchant to represent this gruesome event as art, I probed more deeply to try to understand his psychology.  Was this just a random act on his part?  Did it actually mean anything to him?  And was there something that we in America could learn from this? “Art,” says Alborghetti, “is a reflection of reality.”  More precisely, he saw this piece of art as a scar that says that the world’s problems cannot be solved by violence and war– a memory of the horror of 9/11.  But was that thoughtful, or simply macabre?   “What was it in you that made you respond to this massive destruction with creation?” I asked, somewhat incredulously.  He answered that the poster seemed to depict both the tragedy and the possibility of a new life where earth (grey) and sky (red) meet each other to give origin to new colors, new days and new lives.   He was pointing to a certain resilience that we all have – to how in the face of massive destruction, you may break our buildings, but you cannot break our spirit.  He should know:  Alborghetti’s father was one of the few survivors of the terrible Kefalonia massacre (Greece, September 1943) where 8,000 young Italian young soldiers were killed by the Wehrmacht German army. He was injured, captured and segregated in a concentration camp. Alborghetti reflects: “An unutterable experience. And…slaughter!…I think that only his will to make peace with those awful years – talkin’ about them and… smilin’ too – has saved him, since then, from mind and body disease… “ In this time of remembering 9/11, psychological research and brain science support Alborghetti’s approach to representing tragedy in the beauty of art.  Visual beauty is registered in the brain in the medial OFC (orbitofrontal cortex) – a brain region known for its role in flexibility in thinking and reward (https://iris.ucl.ac.uk/research/browse/show-publication?pub_id=324591&source_id=2)  Beauty resides here too.  It could stimulate the necessary flexibility in our thinking by encouraging us not to lose ourselves in remembering the tragedy but also seeing the beauty in our resilience as a nation as well as the possibilities for recovery.  Studies also show that the perception of beauty activates brain regions, which move us toward the beautiful image or away from it if we think it ugly. (http://jn.physiology.org/content/91/4/1699.full.pdf)  To a certain extent, this gels well with Alborghettis’s intention in the art. Also, art and beauty offer potential forms of healing for all of us. (http://www.ncbi.nlm.nih.gov/pubmed/15152417)  Visual art not only represents the unconscious of the artist (http://www.ncbi.nlm.nih.gov/pubmed/11455363) but  also taps into our unconscious brains (http://www.ncbi.nlm.nih.gov/pubmed/19230327) leading us to parts of ourselves that are often untouched by everyday discourse.  For this reason, it does allow for a special kind of healing. I asked him: “Is your message in your art to America or the entire world?  Why?” He responded that his art was for all who would accept it – that art is a universal language – and that this memory was for all people who care to ask themselves some questions and who will allow emotions and feelings to grow in them. When we think of art representing tragedy, it raises all kinds of questions.  Can we really make art of an experience where people have lost loved ones?  Can we truly justify directing people toward beauty when there is such tragedy?  The beauty of abstract art – and of Alborghetti’s art in particular, is that it is in invitation for us to project what we will onto the piece.  We do so anyway – even when human forms, gardens and ponds protect us with their explicit forms in Impressionist and Renaissance paintings.  Art, as I substantiated above, is a form of healing whose effects we can see in the brain. From a psychological perspective, art is an amazing way to mourn.  When it is as beautiful as Alborghetti’s, it invites us to revisit the tragedy of terrorism, the horror of loss, and the beauty of our own resilience as we make our way through this mysterious life.

Roberto Alborghetti “LaceR/Actions” is a multidisciplinary project about torn and decomposed publicity posters. Realistic images captured on the streets around the world are transferred on canvases, lithographs, textiles, glass, videoclips… 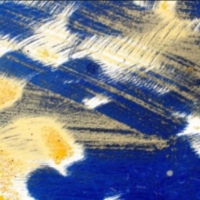 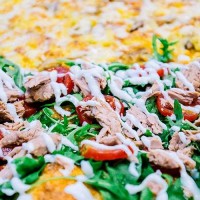 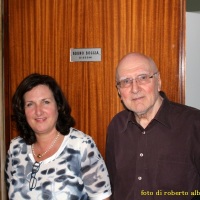 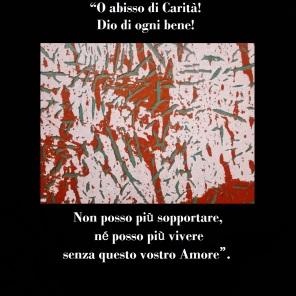 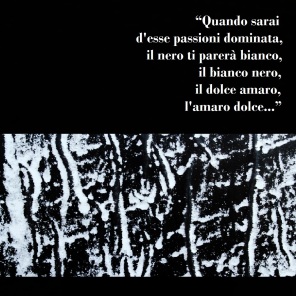